We use necessary cookies to make our site work (for example, to manage your session). We’d also like to use some non-essential cookies (including third-party cookies) to help us improve the site. By clicking ‘Accept recommended settings’ on this banner, you accept our use of optional cookies.

Necessary cookies enable core functionality on our website such as security, network management, and accessibility. You may disable these by changing your browser settings, but this may affect how the website functions.

We are looking carefully at how a UK central bank digital currency (CBDC) might work. But we have not yet made the decision to introduce one

What is central bank digital currency?

Central bank digital currency (CBDC) is money that a central bank, like the Bank of England, can produce. It’s called digital (or electronic) because it isn’t physical money like notes and coins. It is in the form of an amount on a computer or similar device.

We are looking closely at whether we should introduce a central bank digital currency in the UK and how it might work if we did. People sometimes describe this possible UK digital currency as ‘digital sterling’ or ‘Britcoin’. We have not made a decision to introduce one, so it hasn’t got a name, but a CBDC is not a cryptocurrency like Bitcoin.

How is it different to cryptocurrency?

A CBDC is different from cryptocurrency (also known as cryptoassets). Cryptocurrencies are not issued by a central bank. These privately issued digital currencies include Bitcoin, Ether (Ethereum) and XRP.

The value of a cryptoasset can move up and down very quickly. They are a risky investment and anyone buying them should be prepared to lose all their money.

If we produced a UK central bank digital currency, that would not happen. Our currency would be reliable and retain its value over time.

How might a UK central bank digital currency work?

You would be able to use it to pay for things digitally. For example, you could transfer an amount of it to make a payment to someone.

CBDC is sometimes thought of as equivalent to a digital banknote, although in some respects it may have as much in common with a bank deposit.

Any UK CBDC would work alongside - not replace - cash and bank deposits. We will continue to provide cash for as long as the public still want it.

Why is the Bank of England considering a CBDC?

We are considering a central bank digital currency (CBDC) because the way people are choosing to pay for things is changing.

Financial technology (fintech) firms have started to offer new forms of money and new ways to pay. People are using cash less. These changes mean new opportunities and risks that we need to plan for.

We have always looked for new ways to improve our money and payment services. For example, we now use polymer notes because they are harder to counterfeit than paper ones and they last longer. And we’re using the latest technology to rebuild the payment infrastructure that we offer to banks and other institutions.

It is now time to look further ahead. We are examining the possibility of a CBDC for the UK (alongside our physical notes) so we can make sure we are ready for the future.

Will the Bank of England introduce a CBDC?

We are looking carefully at the case for a digital currency for the UK. But we haven’t decided yet whether to introduce one or not. We are looking at what it might mean if we did and how it could work in practice.

Together with HM Treasury (HMT) we set up a Central Bank Digital Currency Taskforce to oversee this work. We are also working closely with other public authorities.

In June 2021, we set out our thinking on the possible opportunities and risks it could bring in our discussion paper on new forms of digital money.

In November 2021, together with HMT, we set out the next steps for a UK CBDC.

These next steps include a consultation in 2022 to help us assess the case for a UK CBDC. It will also look at the merits of doing more work to develop an operational and technology model for one.

Who is the Bank of England engaging with on CBDC?

We are speaking to businesses and communities to find out what impact a CBDC would have on them.

In March 2020, we published a discussion paper on CBDC. This outlined one possible approach to the design of a central bank digital currency. We sought feedback from the payments industry, academics, and other interested parties.

You can read a summary of the responses to our 2020 discussion paper. We published the responses in July 2021 and produced a webinar based on them. 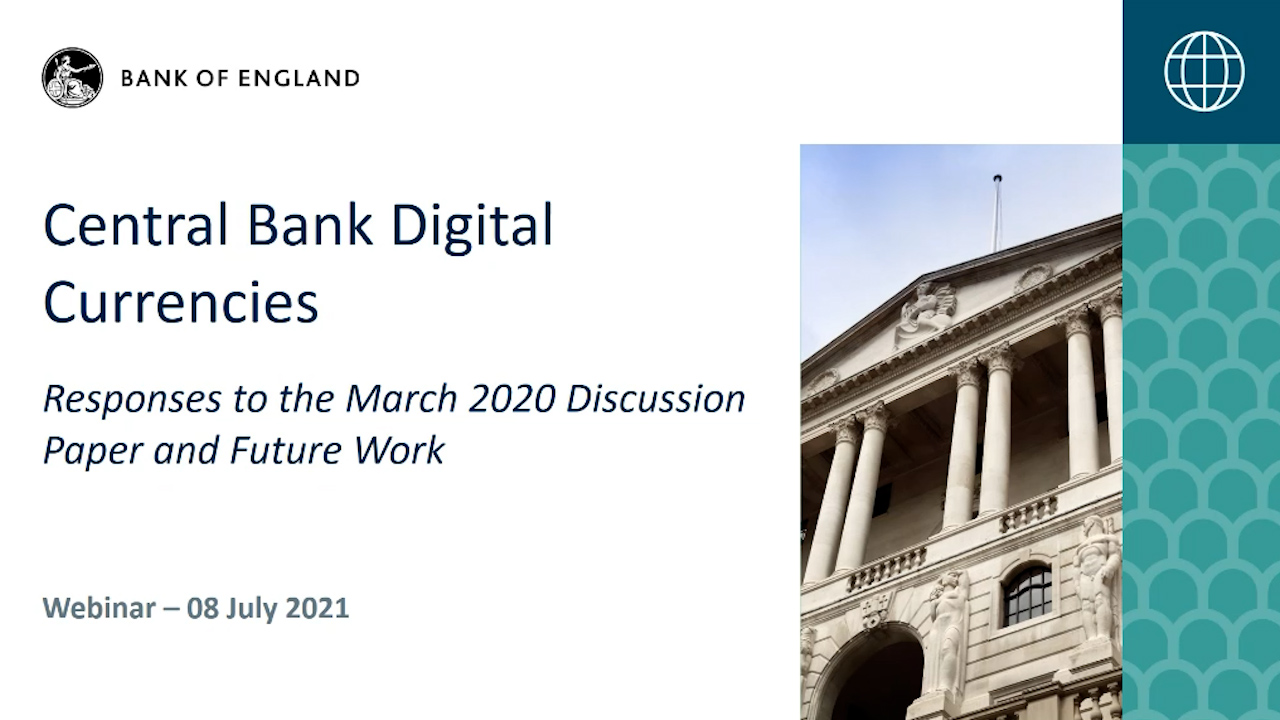 In April 2021, together with HMT, we set up two forums to help inform our work. We publish the minutes of CBDC forum meetings.

The CBDC Engagement Forum looks at all aspects of a central bank digital currency apart from the technology it might use.

The forum helps us to understand the practical challenges of designing, implementing and operating a CBDC, which includes:

The forum’s members come from financial institutions, civil society groups and merchants. We chose them by an open application process (the window for that has now closed). We chair this forum jointly with HM Treasury.

The CBDC Technology Forum looks at the technology a central bank digital currency might use. The forum enables us to involve people with a wide range of expertise and perspectives. This helps us to understand the technological challenges of a designing, implementing and operating a CBDC.

The forum’s members come from a range of financial institutions, universities, fintechs, infrastructure providers and technology firms. We chose them through an open application process (the window for that has now closed).

To contact our CBDC team, email cbdc@bankofengland.co.uk. You can also find out more about our research on fintech.

Minutes of the CBDC Engagement Forum - May...

Minutes of the CBDC Engagement Forum - May 2022

Thanks! Would you like to give more detail? Press Spacebar or Enter to select